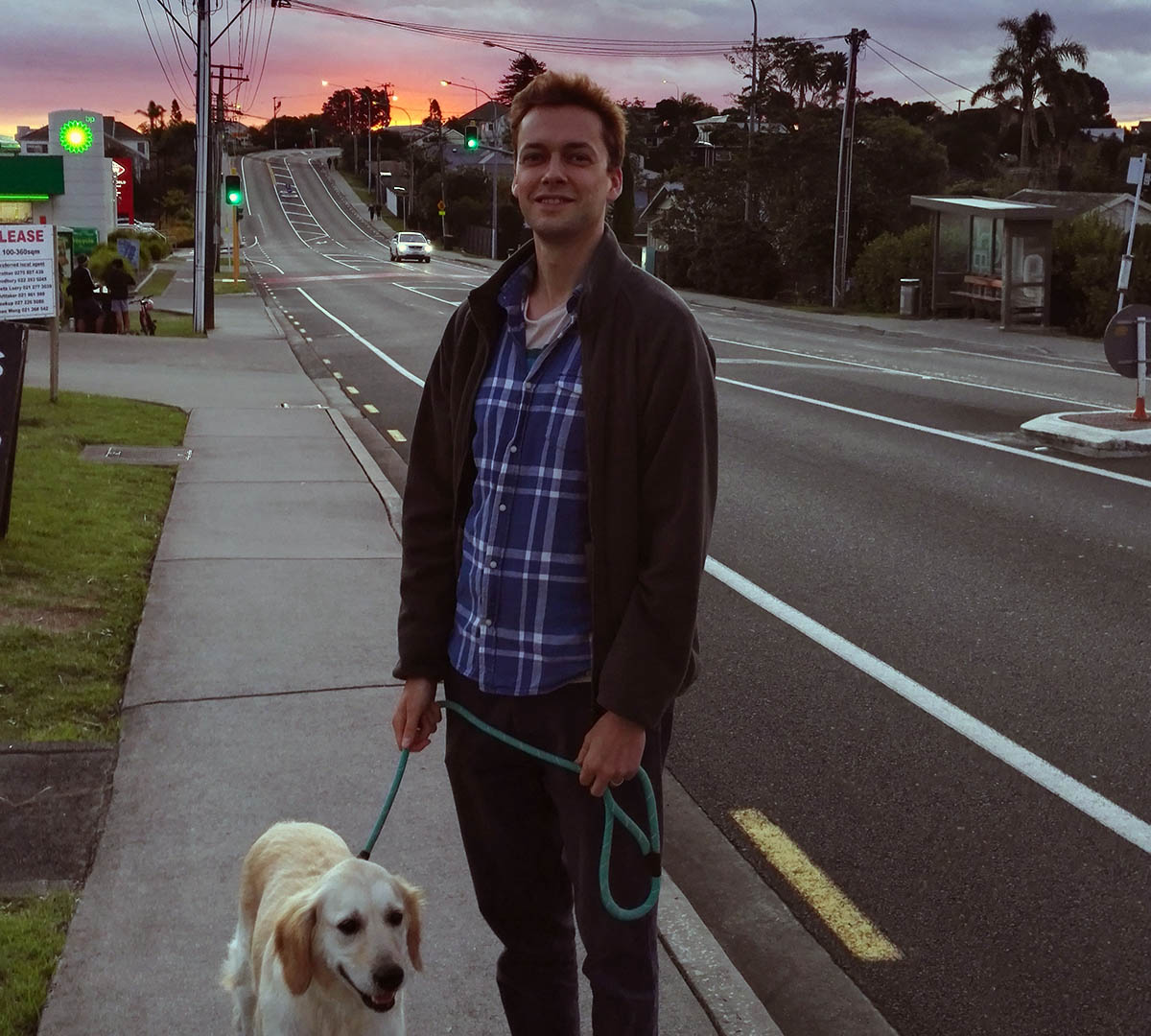 “I originally did an undergrad degree in physical geography at Manchester Metropolitan University. That was a while ago – I graduated in 2010. I then did various jobs, worked in travel for a bit, but I had an itch to do something to do with the oceans. So in 2016 I did a masters at the University of York in marine environmental management. That was really good; I got to do a few placements; I went to the Maldives and worked with a whale shark research group for a while. That was amazing; we saw whale sharks every day, it was incredible.

“I learned that there are these amazing places, and that if you go there you’ll see the amazing animals that live there. That experience reinvigorated my interest. After the masters finished in September 2017 my wife and I decided to go travelling, and we wanted to see New Zealand. My wife was applying for different jobs and the company she was working for in the UK had an affiliation with a company in New Zealand. It was looking as though her role was going to be a bit more serious than something you could do on a working holiday visa, so I started wondering what I could do. I had all this passion and enthusiasm for all things marine at this point, so I started looking into doing a PhD.

“I found a supervisor at Auckland who was enthusiastic about my emails and ideas, and he offered to support my application for a PhD. Then I contacted Study Options and it all fell into place from there. I was also lucky enough to get a Commonwealth Scholarship.

“My PhD looks at how we can balance fisheries with conservation. In a nutshell: Can we have our fish and eat it too? On a global scale I look at a lot of data – I do lots of computer work – and I create maps of the world that show the best places to protect based on the amount of animals there, their threatened status, and if those areas are away from key fishing areas. So, how effectively can we protect our oceans while not threatening food security. And then on a New Zealand scale I’m looking at how you can protect fish for commercial fisheries, so they get bigger, and when they are bigger they produce 10-40 times more eggs than smaller fish, and then how that can also boost fishing while also protecting areas for other animals too; such as dolphins, whales and sharks.

“Designating reserves and protected areas is all really about politics and community support. In that way New Zealand is good because various different groups here care passionately about the oceans. But then you dig a bit deeper and it’s similar to the UK in that there are areas that need to be protected, but haven’t been. What I do like here is that people here seem to be more invigorated about protecting the oceans. It’s also really cool to see how much marine life they have here. There’s simply more nature within the sea! My wife and I went for a whale cruise from Auckland – New Zealand’s biggest city – and we saw a super-pod of around 300 dolphins which was just amazing, you would just never see that in the UK.

“My days are quite flexible. That’s a good point of doing a PhD – you have a boss, so to speak, in your supervisor, but you’re also your own boss so really you set your own agenda. My work is all computer-based, I don’t have any field work because I’m looking at big data – maps and fisheries data from the New Zealand Government. So I might need to go down to NIWA, the National Institute of Water and Atmospheric Research, to speak to one of my supervisors who works there, or I might be up at the university, we have a PhD room there. We have seminars every Wednesday, where we catch up with what everyone’s working on. Or I might be at a conference; either just listening or presenting and networking. It’s a nice, open community at the University – there’s always something going on and lots of opportunities to opt in. That’s helpful, because it can be quite a solitary affair, doing a PhD, and that’s a taxing aspect of the experience.”

We use cookies on our website to give you the most relevant experience by remembering your preferences and repeat visits. By clicking “Accept All”, you consent to the use of ALL the cookies. However, you may visit "Cookie Settings" to provide a controlled consent.
Cookie SettingsAccept All
Manage consent

This website uses cookies to improve your experience while you navigate through the website. Out of these, the cookies that are categorized as necessary are stored on your browser as they are essential for the working of basic functionalities of the website. We also use third-party cookies that help us analyze and understand how you use this website. These cookies will be stored in your browser only with your consent. You also have the option to opt-out of these cookies. But opting out of some of these cookies may affect your browsing experience.
Necessary Always Enabled
Necessary cookies are absolutely essential for the website to function properly. These cookies ensure basic functionalities and security features of the website, anonymously.
Functional
Functional cookies help to perform certain functionalities like sharing the content of the website on social media platforms, collect feedbacks, and other third-party features.
Performance
Performance cookies are used to understand and analyze the key performance indexes of the website which helps in delivering a better user experience for the visitors.
Analytics
Analytical cookies are used to understand how visitors interact with the website. These cookies help provide information on metrics the number of visitors, bounce rate, traffic source, etc.
Advertisement
Advertisement cookies are used to provide visitors with relevant ads and marketing campaigns. These cookies track visitors across websites and collect information to provide customized ads.
Others
Other uncategorized cookies are those that are being analyzed and have not been classified into a category as yet.
SAVE & ACCEPT
Powered by